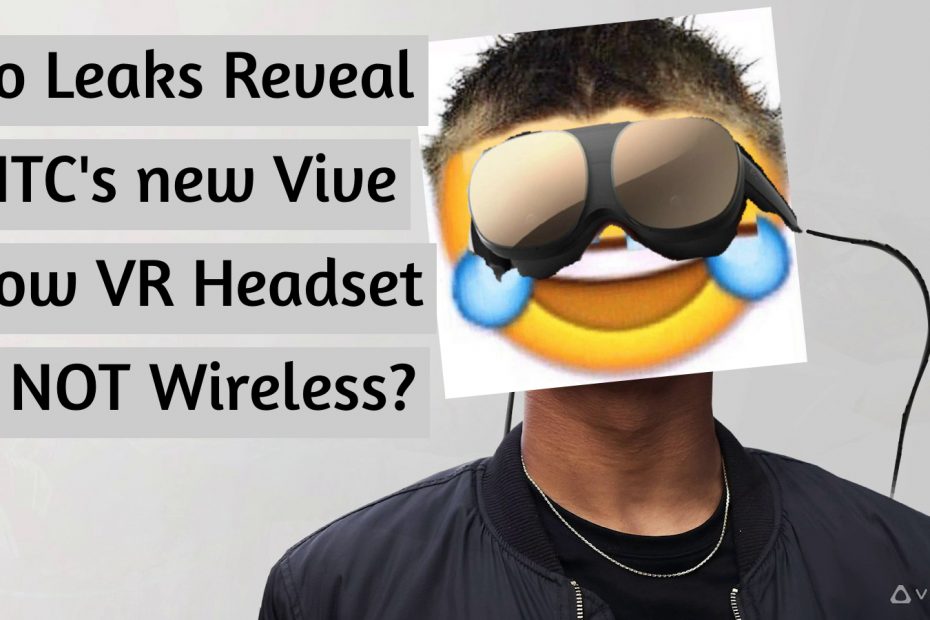 With the leaks of HTC’s new Vive Flow VR Headset shocking the world merely two days before the announcement on Thursday, it’s all part of the greater pattern of tech companies using “leaks” as part of its promotion circle. What’s even more disturbing to many VR and WMR enthusiasts, is even in 2021 we are getting new VR Headsets that are NOT wireless.

Why Is Everyone Angry The Vive Flow VR Headset Isn’t Wireless?

The biggest reason everyone is justifiably upset is that in 2021 the technology is already deployed to make wireless VR headsets a household item. The basic protocols set out in Wifi 6 allow for bandwidth speeds that make it very, very easy to cast video with near-zero latency to VR headsets. In fact, this is technology other VR Headsets are already using and the fans love it! Many VR games require or reward intense movement with rapid swings of the upper body, making wired VR headsets a serious threat and problem.

As is all too common with “coincidental leaks”, the pictures revealed the Vive Flow VR is a cable-attached headset. Some may claim these pictures were leaked and the leaker is doing the bidding of the community, but we can’t help but notice the greater trend and extended trending hashtags that get articles like this written, and products like the Vive Flow into the eye of buyers.

So far, over 10 pictures have been leaked and they show what appears to be a bug-like VR headset with a cable that runs to a device that is likely handling much of the graphics processing and power providing to the headset. This will allow the VR headset to be less heavy, which directly allows for a more comfortable headset strap. The cost is the lack of wireless movement, but this may mean the headset is targeting less active movers like those who watch Netflix in VR mode.

The bug-like, fly-inspired design of the Vive Flow VR is pretty hilarious. I think we all knew at some point a VR headset company would try to go the biological route and end up accidentally where we are now: bug-eyed appearance. To be honest, we should be grateful it isn’t covered in battery-draining RGB and other cool gamer aesthetics that would make most people cringe at first sight. It better be backed up by some serious tech, but at this point, it’s anyone’s guess.

Let’s Guess The VR Tech Inside the Vive Flow

We are making an educated guess that the VR inside this will be slightly better than the Oculus Quest 2, but will still lag behind every other wired VR headset. Why? Simple, the chip shortage. What does the chip shortage have to do with VR? Well, the same thing has to do with cars. The best chips are packages and sold months ago, and pre-ordered years in advance. This new product will have to rely on lower-end, less popular chips. This may help explain how the VR device is intended to stand out amongst its competition: being a media-focused enjoyment device. Basically a home theatre on your face. This is to be expected with a more WMR leaning interface and product layout.

What Would the Vive Flow Do Better than Quest 2 and other VR Competitors?

Assuming the device is a media-focused, media-consuming device more so than a VR game console, it would make itself stand out quite easily. It won’t need the horsepower behind other VR headsets and it would allow for higher resolution screens with better refresh rates while cutting back nearly everywhere else on the device. It might not even have speakers if it’s meant to only be superior at the “home theatre on your face” style of VR.

It might help explain the necessity of the VR-cable-attached approach, as watching 3-4 hour long movies is simply too much for most VR headsets. If it uses the cable as a form of power draw from a local battery, it would enable easy enjoyment of media on the go, from airplanes to trains, and may help normalize VR headset use in public.

While we proudly admit we are guessing many of the details about this VR Headset, we get a good chuckle out of the other outlets reporting rumors as absolute truths. It doesn’t matter, the details will all be revealed this Thursday as the official event happens. This is when you should make any decisions and shape any opinions you might have about the device. Anything you see, hear, or read online beforehand is at best an educated guess like our own. That being said, what do we hope is true about it?

Crossing Our Fingers: What We Hope The Vive Flow VR Will Be

This product could be and do many things, as any screens attached so close to your eyeballs could be. However, with the VR market slowly getting more saturated with new options, here is what we hope this VR device will do to stand out and make itself known. The VR marketplace doesn’t have a tried and true “theatre on your face” specialist that doesn’t even aim to be a VR game console. Perhaps that is why we projected these ideas on what we are interpreting and guessing this device to be – it’s what we hope it will be!

Imagine 4k screens with 120hz refresh rates running on OLED panels in a VR-friendly, home-theatre style format. Further, imagine the wire runs to a battery bank, or to a laptop or phone that allows you to play movies and watch Netflix in optimal style. Adding in the real potential this could be a mobile device that would be scary for society. We have seen many new nightmares forms in the past few years, but none will be as horrifying as the implications of what this could be. A perfect and permanent comfortable television strapped to our eyes, making us blind to the harsh reality of the world around us. This could make your daily commute one of your favorite parts of the day. Imagine how much quieter and more peaceful each subway and airplane trip could be. Imagine every child is perfectly distracted into pure silence as you continue your flight across the Atlantic ocean. If it’s as comfortable as the bug-eyed appearance implies, these kids may not want to take it off for a minute!